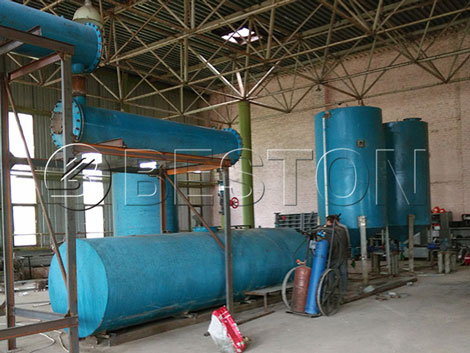 With the development of the world industrial economy and the rapid increase of population, the global energy shortage and the environment are facing more and more serious problems. How to recycle all kinds of waste oil has attracted worldwide attention. Based on the current situation, Beston has development the latest waste oil recycling plant, which is aimed at not only solving the problem of waste oil pollution, but also making great profits.

The waste oil recycling plant for sale can deal with these waste oil materials:

The common engine oil is mineral engine oil, which is obtained from the heavy fraction of petroleum through distillation. The so-called waste engine oil, one refers to the engine oil that has been mixed with water, dust, other miscellaneous, metal power produced from mechanical wear and tear and other impurities in use; another one refers to gradual metamorphism engine oil which has produced organic acids, colloid and asphalt-like substances. Waste oil regeneration means removing the impurities in the waste oil by sedimentation, distillation, pickling, caustic washing, filtration and other methods.

The used oil recycling machine (also called waste oil to diesel plant) adopts an advanced technology called distillation or refining, which is a combination of physical reaction and chemical reaction.

2. Heat the oil distillation reactor, and then liquefied the resulting oil gas;

3. Pickling can further process the engine oil that has been settled and distilled. Concentrated sulfuric acid occurs sulfonation reaction with glial, asphalt-like impurities and so on in the used engine oil;

4. Alkaline washing is aimed at removing organic acids in the waste oil and neutralizing the residual sulfuric acid in pickling;

5. After filtering, we finally get the final products.

The waste oil recycling equipment can not only deal with waste motor oil or used engine oil, but also can deal with the tire/plastic pyrolysis oil as a follow-up equipment. After extracting oil from waste materials by waste pyrolysis machine, if we want to make the oil have high value and wider applications, we often make the oil processed in the distillation plant, also called used oil recycling machine. Finally we can get qualified diesel or gasoline, which can be directly used in low speed engines, such as digging machine, road roller, loading machine, etc.

As a professional waste oil distillation machine manufacturer, we have designed the plant into two types to satisfy more customers: batch plant (BZJ-6, BZJ-10), with capacity of 6t/d and 10t/d).

Each set of the used oil recycling plant for sale has the following advantages:

1. Each of the waste oil recycling plant produced by Beston Group has been certified by CE, ISO, SGS, etc.

3. The plant is equipped with safety values, auto alarming system, anti-explosion value and many other safety devices, which will guarantee 100% safety.

4. Each step of the waste oil recycling process can be safe, energy-saving, environmental friendly, pollution-free. 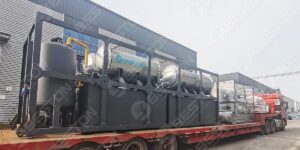